A perfect mix for home-cooked pav bhaji
As I decided to make pav bhaji on my own and surprise my family I decided to buy this pack. I was genuinely happy to use it as it has a very strong and delicious flavour. It gives a restaurant like an aroma to a very basic home-cooked bhaji. Everyone in my family loved it and now this masala has found a permanent place in my home for making pav bhaji.

Everest Pav bhaji Masala
My pav bhaji never completes without Everest's pav bhaji masala. It gives the best flavors and makes pav bhaji finger-licking delicious. I have tried other brands too but nothing is in comparison to Everest's masala.

Everest Pav Bhaji Masala
I have been using this pav bhaji masala for a long time now and it completely adds a whole new flavor to the bhaji so that none can stop eating. The best thing is that it's so affordable and if you want the Indian taste, it's the perfect addition I would say. And lastly, the packaging is also pretty decent with step by step instructions as to its usage.

Nice
This product is pretty good, all the flavors are well balanced and give a restaurant style taste. The only problem is the quantity of the product.

For all the Bhaji Lovers.
This is highly useful while making Pav Bhaji, you should get this if you are at all intrested in Pav Bhaji or you make it occasionally. Highly recommended.

Best
This product by Everest is the quintessential pav bhaji masala. The spices are a perfect blend which, if used in the right amount, will deliver the most delectable pav bhaji. Preferred by home-cooks throughout the country.

Very good
One must try this spice once and will keep it stocked for sure. This brings out an amazing taste in bhaji which any simple spice wont bring out. It enriches its flavor and makes it worth eating.

Amazing product
I always use this masala in my pav bhaji. It just adds to the taste of the dish. I love it's flavour. It is really very delicious and palatable.

Pav bhaji
It's not easy to get a good pavbhaji taste with just the local spices but you can for sure use this go to masala for it.it has got a very good aroma

Chant the Slogan
This is the very masala that makes me chant the Everest Slogan, Taste mein Best, Mummy aur Everest! There's something about the Pav Bhaji Masala of Everest that makes Pav Bhaji what it is for me. I honestly can't think of having Pav Bhaji at home which doesn't have this masala in it!

Good
This is the perfect pav bhaji masala mix I have ever used. Perfect blend of spicy, aromatic and flavourful spices. Add this mixture in your bhaji and you will get perfect bhaji at home.

Pav bhaji masala
It gives a restaurant like an aroma to a very basic home-cooked bhaji. Everyone in my family loved it and now this masala has found a permanent place in my home for making pav bhaji. I have tried other brands too but nothing is in comparison to Everest's masala .

Must try
It is the best product that can give your pav bhaji the perfect street food flavour. I love its taste and prefer using it not only for making bhaji but also tawa pulao and various Maharashtrian streetfood. It is highly recommendable and can be used for various purposes.

Pav bhaji masala
The packing of the product is super amazing and travel friendly . The masala just tastes amazing it just makes the pav bhaji aromatic and different from other. It also has the perfect blend of spices

Finger licking
Pav bhai is most of the people's favourite dish. And I would personally recommend this product to everyone to make it more flavourful. I think this spice and butter are the only met ingredients to make your pav bhaji awesome.

Everest- Pav Bhaji Masala Box
Everest the best spice manufacturer in India brings variety of grounded spices and spice mixture of finest quality. This Pav Bhaji masala is made of grounding roasted spices mix of coriander, dry mango, chilli, black cardamom, cassia leaf, dry ginger, fennel seeds, common salt and many more. It enhances the flavors and taste the pav bhaji which is equally famous as a snack or as a meal. Tough it can't match the freshly grounded pav bhaji mix and the street style flavours yet it's good enough as this masala mix made it easier for us to bring the taste of that street style Maharashtrian sack at our home. But this masal mix is spicy so use carefully. However the packaging needs upgradation.

Taste me best!
I have seen my mother use this masala since my birth. This masala just adds an adequate amount of tanginess and spice to the bhaji. This masala can also be used for preparing Tawa Pulao and i personnaly love and recommend to use everest pav bhaji masala.

Everest pav Bhajji masala
It’s a very good product. Perfect blend of spices to enrich the bajjiii This is the product always it wud b in my kitchen store Nt only for pav bajiii it’s best one to use for other curries whenever u want give extra taste to the curries ( especially mixed veg curry )

Street food flavor at home
Bring my most favorite street food from bombay, I often make pav bhaji at home using this masala. As it helps recreate same aroma and taste as its street style version. I always store it in airtight container as if I keep it to long in it's packaging it loses it aroma over time.

Superb product
All the spices in my spice rack are of only the brand everest, since childwood I saw only everest masala at my home. And now after marriage I am also using the same . With this I can taste "maa ke hath ki pav bhaji "

Extact Restaurant Taste
One of my favourite dish is pav bhaji. I like it to be just want perfect peculiar taste orelse I won't eat & only product which turns my pav bhaji perfectly delicious is Everst Pav Bhaji Masala. Since I started cooking I am using it for last 35-40 yrs it has consistently retained its tase & quality with same aroma and flavor. It gives you extact resturant taste. It is one of the masala I always have in my pantry. I use this masala to prepare more dishes like masala pav, tawa pulao, sometimes in alu-matar sabji n so on.if u haven't used this masla please do try I am sure once u try u will start using it regularly.

Flavourful
Find it great for my pav bhaji

Too good
I have tried so many pav bhaji masala but I must say Everest pav bhaji masala is best.It makes my pav bhaji more tasty, more delicious.Flavour is awesome,easily available & packaging is good.I use this spice to my other dish also.

My personal experience shared!
Everybody at home just love the bhaji made using this masala. It is a must in my masalas as the taste of pav bhaji matches almost the one available outside. I add this masala in few other items also and just loved by all! This masala when added to mix vegetable paratha they taste yummy. Also when added to tomato bharta it just tastes amazing. This is one of my favourite spice!

Best masala for making PavBhaji
I have been using this masala for ages now. Perfect brand of spices. This masala makes the best tasting Pav Bhaji. Strongly recommended this product

Pav bhaji is super delicious to taste . It is a popular Indian fast f...

Pav bhaji is super delicious to taste . It is a popular Indian fast f...

This vegetable is often made in Punjabi houses. Easy to cook. You can ...

This vegetable is often made in Punjabi houses. Easy to cook. You can ... 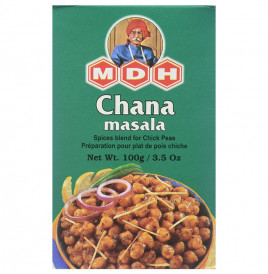